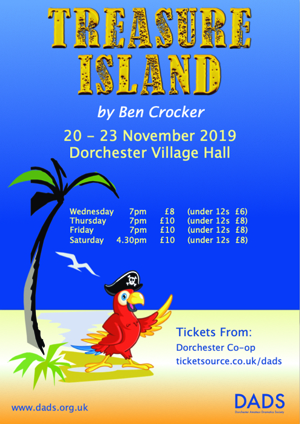 A lot of fun for all the family

I attended the DADS Pantomime on the first night and was treated to a feast of good family fun, where fellow villagers put their best acting feet forward to entertain and amuse both young and old.

The adaptation of Treasure Island by Ben Crocker, into a pantomime is unusual and required several changes to the well loved classic adventure story, to make it suitable for the pantomime world. Young Jim Hawkins successfully became the romantic lead and Mrs Hawkins, who does not exist in the book, was transformed into a traditional dame. Ben Gunn became a photographer, thus updating it into the 21st century and by including a group of WI ladies the author provided plenty of parts for female actors. The WI group, together with the Squire’s daughter Jenny, showed ‘girl power’ in control when they met with the 18th century pirates, and their insistence on health and safety matters finally proved to be the downfall of the pirates. It was all together funny, fast moving and essentially true to the story.

After a slightly hesitant start, Mrs Hawkins, (Ian Brace) soon had the audience involved and kept the pace going throughout. Her colourful costumes looked good and were worn with great aplomb in a typically dame manner which kept the audience laughing.

Ann Winslet’s direction used the available actors well and did not overburden them; she even managed to fit them all on to the relatively small stage, which was quite an achievement. The songs and dances, with expert accompaniment on the piano from Russell Leigh, were short and snappy and kept the audience entertained. I was a bit puzzled and con- fused about the ghost scene in the cave where they were looking for the map, but realised it was to give opportunity for the audience to call out, ‘It’s behind you’, and ‘Oh yes it is’. For me it was done a little too quickly and over too soon before we could get into spirited replies. The slapstick baking scene was rather clumsy and over very quickly, but I understand these routines improved over the run and were highly successful on the last night. The quick costume changes were handled well with many people requiring different outfits and props.

The scene changes were unobtrusive, with the stage crew moving quickly to get everything in the right place. The set was well designed and constructed by Mark Wilkin, Michael Herbert and the team, and the scenery, using projected colourful artwork by Adrian Brooks worked brilliantly. The sound effects and lighting were handled skilfully by Simon Ratliff.

The romantic leads by Jim Hawkins [RossWilkin] and Jenny Trelawney [Rachel Winslet Morris] were well enacted with good stage presence. They both managed to portray 21st century people living in the 18th century in a convincing manner. They sang their duet with confidence and had a good rapport with the audience. The comically fierce pirates were energetically led by Long John Silver [Mike Lord], who had a short peg leg. He had an interesting relationship with his parrot Polly [Jane Brooks]. I loved her costume and parrot movements and would have liked to see more of her, perhaps some dancing? I do understand that the costume made seeing and moving difficult, but I enjoyed her performance. The Fridge [Mark Wilkin] threw himself into the part and portrayed a complex character with great authority, being both frightening and funny. Seadog Sam [Kate Phillips] and Seaweed Willy [Amelie White] had a good partnership and were excellent at handling the audience, getting the children on stage and getting everyone to participate in the singing.

Squire Trelawney [Mark Williams] who loved his puddings, especially Spotted Dick and custard, was a genial soul. He was very fond of the WI, and loved his daughter Jenny [Rachel Winslet Morris] although the 18th century Squire had no concept of a modern girls abilities or ambitions. His main desire was to eat as many puddings as the WI ladies could produce.

The WI ladies played a wide range of characters and were well controlled, commanded and led by their president, Mrs Henderson [Rosemary Mills]. I especially enjoyed the pirates transformation into rival WI ladies, led by the irrepressible Long John Silver in a splendid frock. The interplay between the two groups was amusing, with health and safety issues resolving all problems, bringing the play to a happy conclusion.

A lot of fun for all the family. A traditional, knock-about pantomime which was enjoyed by young and old alike.

Given the constraints of the stage and hall this pantomime made excellent use of all the available space. The ingenious projection of the scene onto the back wall of the stage told us all we needed to know regarding the location of the action. Ian Brace, as Mrs Hawkins, the dame, anchored the show brilliantly, taking us from scene to scene. His mannerisms and affectations were just right. I would like to have seen him in different outfits as the action progressed. That is just a minor point, as his wedding dress was quite spectacular. Mrs Hawkins was ably supported by other principals including her son, Jim, (Ross Wilkin) and Squire Trelawney (Mark Williams), whose passion for ‘spotted dick’ gets him into all sorts of trouble, particularly with the malevolent Long John Silver (Mike Lord) who managed to manoeuvre ably with his wooden leg.

Romance between Jim Hawkins and Jenny Trelawney (Rachel Winslet Morris) was a charming moment and well cast. Apart from sea shanties and the audience song, theirs was the only song and dance in the show, which was a shame as there could have been opportunity for more songs, particularly as there was an excellent pianist present.

The supporting parts of Seadog Sam (Kate Phillips) and Seaweed Willy (Amelie White) really excelled with their cavortings with the kiss of death ‘black spot’, eventually finishing off Billy Bones (Maxine Briscoe), whose dying scene was a sight to behold!

It was a touch of genius to mix the Women’s Institute with the pirate ship expedition to Treasure Island. The troupe of Women’s Institute members, were enough to strike fear into the hearts of anyone, including the pirates, being led by the indomitable Mrs Henderson (Rosemary Mills) who was a real tour-de-force. The pirates in drag, meet up with the ladies of the Women’s Institute in a bake-off style contest. This involved messy ‘crazy foam’ and the slapstick scene could have been enhanced to make it more worthwhile. The hazardous voyage aboard the Hispaniola, the eventual landing and locating the treasure on the island was handled well, along with removing it from the haunted cave.

This was a well performed show, which was enjoyed by the enthusiastic audience.