Review of “Rumours”,  by Neil Simon 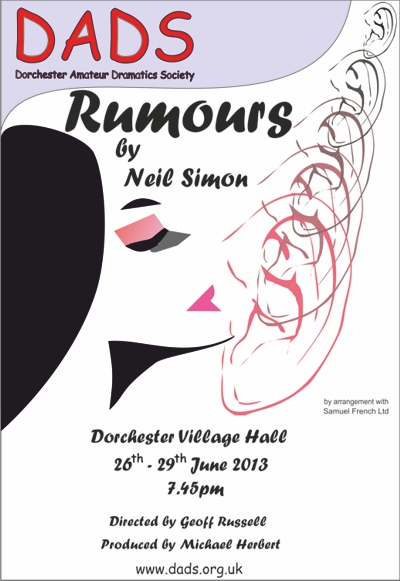 DADS were well and truly on form with this production of Neil Simon’’s only farce, Rumours, which was first performed on Broadway in 1988. This was the English version, so thankfully we were spared attempts at American accents, which can be a strain even on professional thespians.

This was a fast-paced  production, which produced a lot of laughs, not least the wonderful scene which had the whole cast dancing uninhibitedly to very loud 1970s music. The play is set in 1977 and concerns four well-to-do couples who have been invited to celebrate the 10th wedding anniversary of Charlie and Vivian Brooks. They are dressed up for a black-tie event, but things do not go according to plan.

As in most farces, the plot is hardly credible. The couples are all in their way concerned about their reputations and the avoidance of scandal. First to arrive are Chris and Ken Bevans, Rosemary Mills and Mark Johnson.  It is Ken who finds Charlie bleeding upstairs from a gunshot wound to the head. Charlie is in no position to relate what has happened. The staff have all gone too, but the kitchen is well stocked with food and drink. Whatever has happened, Ken decides to keep it from the other guests in order to protect Charlie and Vivians’ reputations, and he insists to his wife that on no account must the police be involved.

This scenario allows all four couples to interact with varying degrees of hilarity based on misunderstandings and rumours. Chris spent the evening getting slowly blotto, something Rosemary Mills did very well indeed, ably abetted by Mark Johnson, who seemed very much at home in this pivotal role. 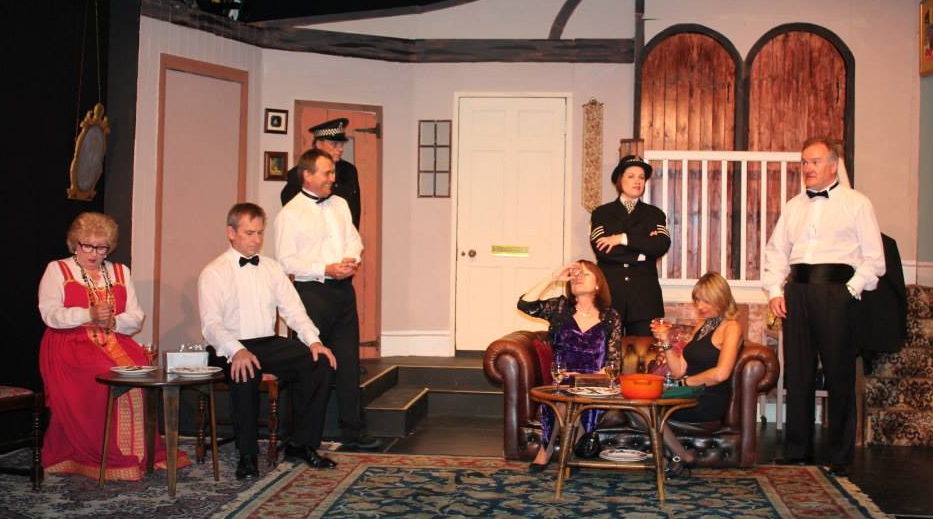 In due course the other couples turned up. Lynne Kerry played Cookie Cusack, so called because she is a celebrity cook with a penchant for somewhat folksy outfits. Despite suffering from frequent spasms of back pain, she ended up cooking supper for the party.. Ernest, her husband, played by Mike Davies, delivered some very funny lines in a deadpan way.

Claire and Leonard Cummings arrived next, Carole-Anne Tilley and Alex Watts. They had just been involved in a car accident in which he had suffered a whiplash injury. They were followed by the Coopers, Mark Williams and Christine Jones. Glenn Cooper is a rising political star and very concerned about the merest hint of scandal.  Mark was very convincing in this role, as was Christine Jones in hers, elegant but as hard as nails. They spent most of the evening bickering with each other. 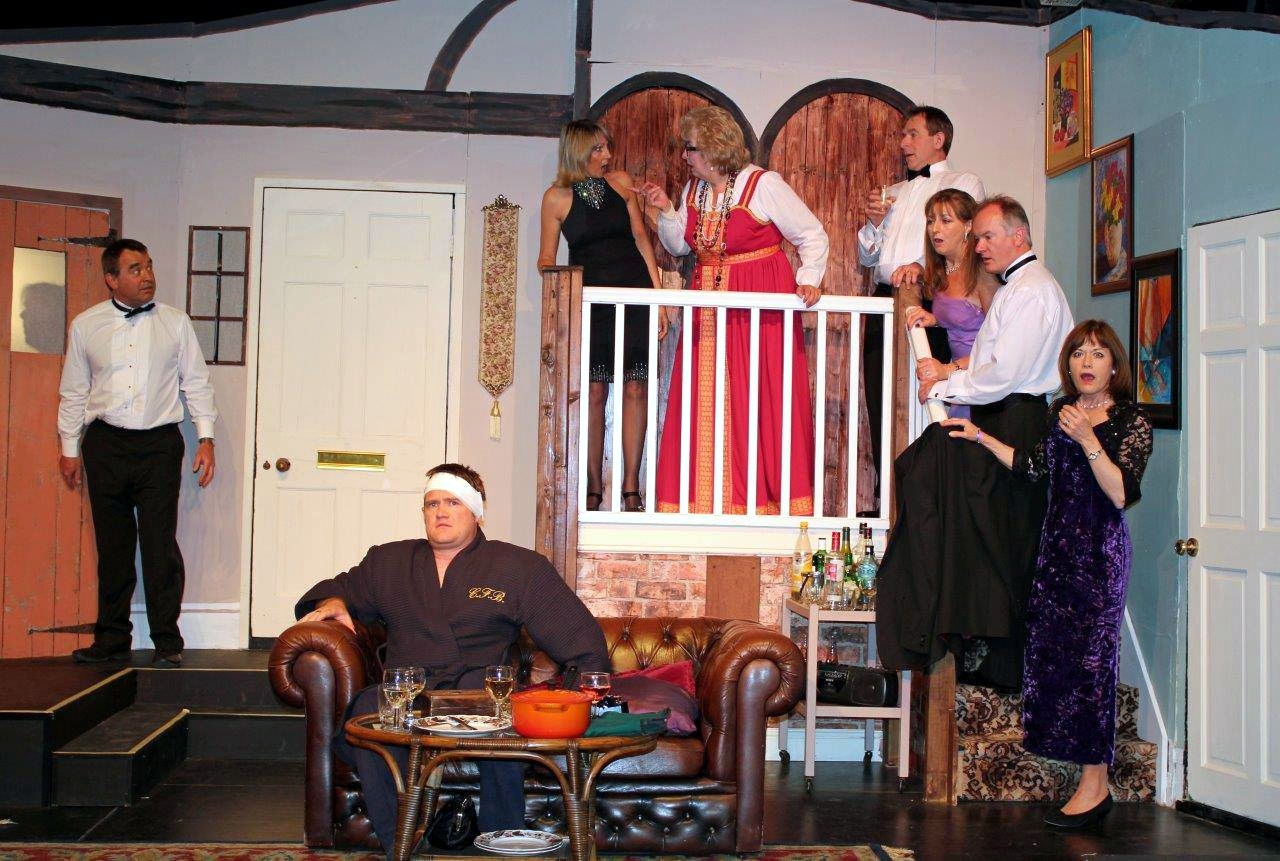 Despite Ken’s best efforts, the police do turn up in response to the shooting incident but also to investigate the car accident.  As Police Sergeant Conklin and her side-kick reached the front door, the guests agreed that Leonard should impersonate Charlie should the need arise, which of course it does, with hilarious consequences. Rachel Winslet-Morris as Conklin is always good to watch on stage, and she managed to catch exactly the right tone of over-enunciated police-speak. She was well supported by her lugubrious Special Constable, Michael Herbert.

But it was Alex Watts as Leonard (or should that be Charlie) who stole the show. Attempting to explain to the police what had happened to him and his wife before the guests arrived, he told an elaborate tale of mishap following the drinking of a celebratory bottle of champagne. This had led to all sorts of consequences, not least a gunshot wound to his ear and his wife’s being locked in the basement. He was making it all up, of course, as no one present knew exactly what had gone on between Charles and Vivian. It couldn’t possibly be true, could it?

Somewhat unbelievably, the police swallowed the story and left without pressing any charges.

With the police gone, there was a collective sigh of relief until they all heard a faint knocking and a woman’s voice saying, ‘let me out’. It seemed to come from the basement. Could it possibly be Vivian? Was Leonard right after all?  We will never know, since  it was at this point that the play ended.

Geoff Russell, ,who directed, managed to maintain the pace and draw out some memorable performances. The play depended on a strong ensemble company, and they achieved this.

As always with DADS, the stage set was brilliant, given the limited space available.  So too were the costumes, in which everybody looked the part. 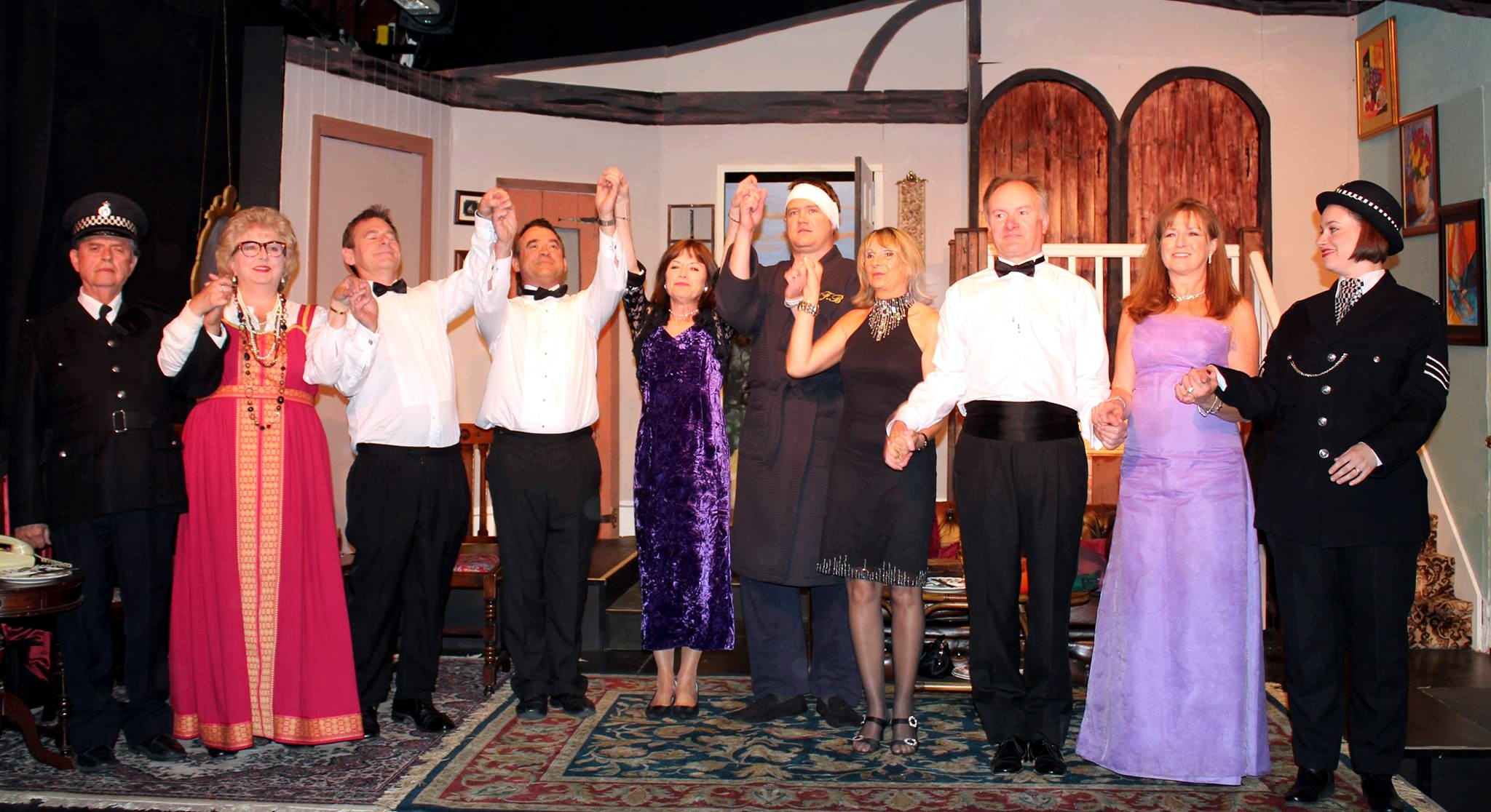