Review of “The Dover Road” 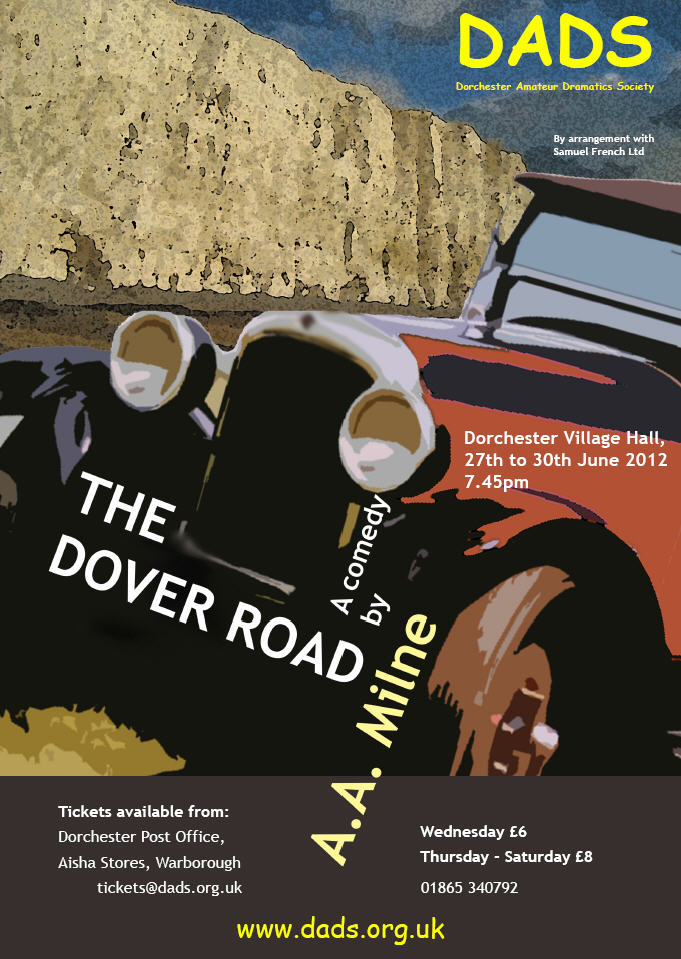 Winnie the Pooh was also a prolific playwright early on in his writing career. The Dover Road was a huge hit on Broadway during the 1921-22 season. By the 1940s its life seemed almost over and it was largely forgotten.  Truth to say, this is a dated play but styled as an “an absurd comedy” it doesn’t matter much.

The action takes place in the house of a Mr Latimer a rich, and somewhat eccentric, gentlemen who arranges for couples eloping from Dover to France, to be “hijacked” for a week at his expense.  He offers them lavish hospitality and they find for one reason or another they are unable to leave.  His idea is to show each to the other in a rather less romantic light than hitherto. It is a novel and interesting premise and one with enormous comic potential which was not always realised in this production.

The first couple we meet are Leonard – “His Lordship” as Mr Latimer insists on calling him, and Anne. Their car has apparently broken down although we later learn that this has been contrived by Mr Latimer.  Leonard has left his wife Eustasia for Anne.  Mark Williams as Leonard gave a somewhat under-powered performance which was rather disappointing. However, there were some deft comic touches, not least, shaving in a non-existent mirror while facing the audience.  Laura King, as Anne was excellent with a real feel for the way a person of the period spoke and moved.  With a very expressive face, she betrayed only too clearly her feelings as the scales fell from her eyes.  It happened remarkably quickly.  Meeting at breakfast on the first morning she finds Leonard in a somewhat dishevelled state and lacking the table manners she might have expected from a man of his status.  Dressed in somebody else’s dressing gown and with his socks suspenders visible he is not an attractive sight. He has also developed a severe cold, on account of being made to sleep in a draughty room, another little ruse of Mr Latimer’s.  The suit he arrived in had mysteriously met with an accident involving bathwater.  All part of the plan of course.

I suppose one could see Mr Latimer as doing a favour to both couples as the situation they find themselves in reveals their weaknesses and annoying habits.  Barry Gibney as Mr Latimer had the fluency and diction of the period although could have played up the manipulative and sinister side to his character more.  His butler, Dominique (Dominic in the original) was played skilfully as ever by Rosemary Mills.

On the day after their “capture” Leonard and Anne realise that another couple have been staying and are about to leave.  But who are the other couple?  Not hard to guess that one half is Eustasia, Leonard’s wife with her lover, Nicholas.  It was good to see Johnny Cornelius in the role of Nicholas. He has real potential as a comic actor.

Throughout their married life Leonard has never been ill so never needed Eustasia nursing skills. His cold brings out all her nurturing instincts and she cossets and fusses over him to an alarming degree.  To cheer him up she even reads aloud but from Gibbon’s Decline and Fall so not much relief there either. Lynne Kerry played Eustasia convincingly as a very annoying, if kind hearted woman who could not let a man rest but always had to be fussing over him.  Poor Nicholas was beginning to see this too. It did not take long for Leonard and Nicholas to forge a bond because of their shared experience of Eustasia’s fussing.

Meanwhile, Anne has decided she must leave although finds that she has insufficient funds to do so.  Nicholas has rather fallen for her and when she asks him for a favour he realises that the feeling is not mutual. She asks for the train fare home to return to her father.  Nicholas is not the only one to feel a quickening of the heart when faced with her presence.  Mr Latimer too is to be let down when, as she leaves she says she wished he had been her father.  Not quite what he had hoped to hear!

Jacob, Joseph and the Maid, played by Michael Herbert, Peter Collins and Elaine Wilkin respectively, saw that Mr Latimer and his guests’ every need was catered for without demur.

The dénouement sees Nicholas and Leonard plotting their departure together to the South of France. Latimer manages to find a means to keep Eustasia from escaping by dint of Joseph falling ill very conveniently.  He knows that she will be unable to resist the opportunity to nurse him. It seems to work. No sooner have Anne, Nicholas and Leonard departed than there is a knock on the door and a hesitant voice asks “is this an hotel….?” and the whole charade starts up again.

A crisper and more clearly enunciated performance by some would have been welcome but the excellent costumes, the clever set and music from the period made for an enjoyable evening of “absurd comedy” with food for thought.