Review of “A Flea in her Ear”, by Georges Feydeau 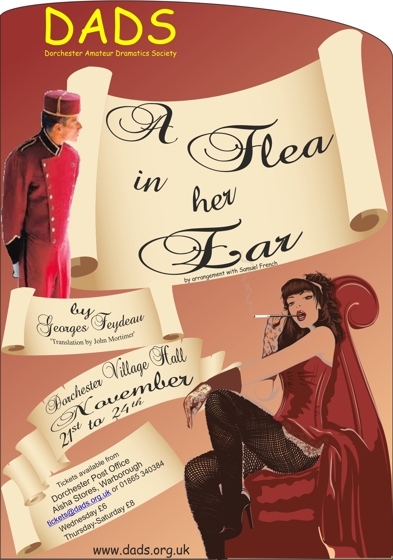 I can understand why the Dorchester Amateur Dramatics Society wanted to put on this play. It provided roles for a relatively large cast of characters, and it must have been huge fun to perform.  But it is very dated, and was it ever that funny when first staged in 1907? Perhaps it loses something in translation.

Set in the period known as la belle époque, the title apparently means to provoke desire in somebody else. Well, passions were certainly aroused, and tempers flared. The action takes place in the home of the Chandebises and the Hotel Coq d’Or. Victor-Emmanuel Chandebise (Mark Wilkin) is married to Raymonde (Lucie Hall), who believes he is being unfaithful. In fact most of the characters are having affairs or would like to be. Most of them, too, are frequent visitors to the Coq d’Or, a rather sleazy hotel well known as a rendezvous for illicit assignations.

The plot is frankly labyrinthine, and one is left with the impression of mistaken identity (two character look very alike), misunderstandings, mismatched couplings and a lot of energetic to-ing and fro-ing.

All the cast did well to keep up the pace, but the total effect was, I am afraid, just not very funny. I think this was less to do with the acting than the play itself. Infidelity may have changed little, but society has, and it is discomfiting to have a character, Camille, with a speech impediment that makes him a figure of fun. Mark Johnson did well to maximize the characters’ comic potential, though.

The high point was the arrival on stage of Homenides, husband of Lucienne, best friend of Raymonde. Alex Watts filled the stage with his big voice and wonderful Spanish accent. He had real stage presence and demonstrated a talent for ad libbing at one point in the performance I attended. Although a caricature of a Spanish hot-blooded male, he brought it to life and made one sit up and take notice.

This aside, there was little to hold one’s interest in a play that today seems creaky and outdated.  It would, however, be good to see a more up-to-date farce that an audience could more fully engage with, such as one of Alan Ayckbourn’s. It was difficult at times to find the comedy in much of this, and farce should be side-splittingly funny if it is to work. Sorry: this just wasn’t funny enough, despite everyone’s best intentions, exertions and enthusiasm.

The cast and all involved should be congratulated for working very hard and trying their best with difficult material.