What makes more than 30 people come together to celebrate the work and enthusiasm of one man.?  Well the style, effort and service of Terry Chipperfield to drama and music in Dorchester and the villages around it is what it requires.

John Howell MP, and Geoff Russell led this celebration over two nights with the life and times of a man who led DADS through 30 years of performance  in a huge range of shows and plays.  There were songs from  six musicals to entertain and amaze a receptive audience and provide a level of nostalgia you could nearly cut with a knife.

The show was opened by the Wittenham Singers, and the second half opened by Two-a –Part.  These are both choral  organisations graced with Terry’s membership.  Tim Cook recounted how Terry had graduated from tenor to baritone and so far had proved irreplaceable.

Rosemary Mills is to be congratulated for masterminding the whole event, and Angie Paterson for its Musical direction.  Not only the singing but the displays of photographs of many of the shows were remarkable.

Many of the singers had acted and sung in the shows featured in the event with some of the individuals revisiting their own songs .  In the second half Showboat featured  in some length and included Mark Wilkin’s renewal of the role of Captain Andy.  The singers closed the show with a really old favourite piece from “Pirates of Penzance”  When the foeman bares his steel.

However the surprise end was a moving speech by Terry’s daughter  Jo on what it was like to observe the service of her father to his family and to  all the groups that came together to honour him.

We may not see again one of his like. 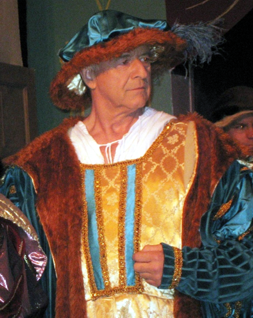 After the ball    –    Sarah Gladwin and Chorus

All profits will be donated to the Nasio Trust