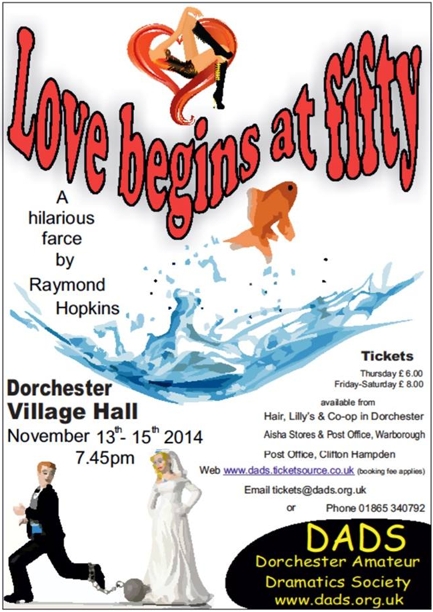 The Debanks have been married for 28 years and Clive (Mark Williams) is approaching 50 and looking for some excitement. He has fond memories of his youth in the 1960s and wants to try and recapture it. His wife Anita (Rosemary Mills) is always busy with worthy committee meetings – or so we are led to believe – which take her out of the house on a regular basis. The plot hinges on a com-petition advertised in the local paper with the prize of a Caribbean cruise for the most happily married couple. Anita, unbeknown to Clive, enters this encouraged by her best friend Clair (Ann Winslet). Meanwhile Clive discovers the lonely hearts column in the same paper and decides to contact three ladies with a view to an affair. His best friend, Jack, (Mark Johnson) encourages him with a bet of £100. However, Jack does not rate Clive’s chances given his age and encourages him to don a Roy Orbison wig and dark glasses to meet his potential lovers.
Three women respond. Annabel (Rachel Winslet-Morris) is the first to arrive and, realising he is closer to her mother’s age, who is,a huge fan of Roy Orbison, leaves pretty promptly.
Mavis (Sue Kitson) then shows up under what turns out to be false pretences. She is selling Supervit tablets (left) guaran-teed to bring vim and vigour back to the most jaded individu-al whatever the problem.

Finally Emily (Lucie Hall) turns up, blonde, glamourous and attractively shy and nervous. It is, for Clive at least, love at first sight. 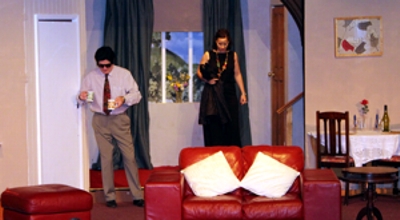 Clive and Emily are together when Henry Clark (Geoff Russell) arrives; a photographer from the local newspaper wanting photographs of the happy couple for the Caribbe-an cruise competition. He asks them to kiss for one of the photographs and has to leave them to it, astounded at how obviously in love they still are after 28 years of married life.
Not surprisingly perhaps, Anita’s committee meetings turn out to be an affair with Annabel’s father who left five years ago.
The Debanks win the competition but it is Clive and Emily who take up the cruise. Anita has gone off with her lover.
Tracy (Christine Jones) the Debanks’s daughter portrayed a suitably self-centred young woman with a crumbling mar-riage convincingly, as did Ann Winslet as Anita’s best friend Claire who was out to entrap poor Jack into marriage if she possibly could.

Three cast members stood out. Sue Kitson is a really good character actress and is always good to see in a cast list. So too is Rachel Winslet-Morris. In a relatively small part this

time, she always manages to be totally watchable. Lucie Hall looked and acted the part extremely well. It was a shame that the prompter, Liz Frederick, had to step in quite so many times. The production could have done with a more disciplined directorial hand to guard against a lot of unnec-essary mannerisms and fidgeting by some of the cast which was distracting at times.
Raymond Hopkins donates his royalties from this and oth-er farces, to Multiple Sclerosis Research and has done so since 1998. He was in the audience on the night I saw it and I hope he thought it was all in a good cause. Certain-ly he gave a packed house plenty to think about.
Megan Parry 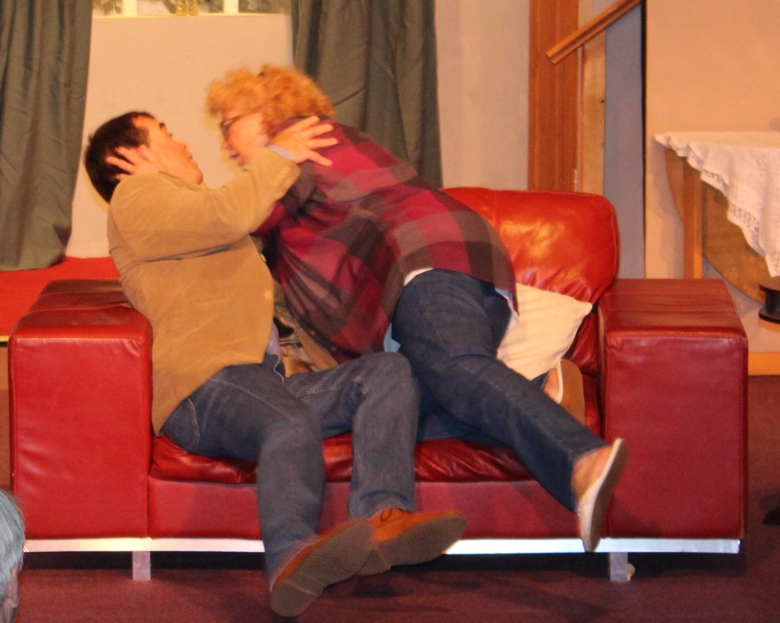 Raymond Hopkins first wrote this comedy as a way of raising money for Multiple Sclerosis Research, his daughter having been struck down with this awful condi-tion, and every penny due to him through royalties has been donated to this charity. DADS joined this cause by running a raffle, with funds going to a local MS charity based in Didcot.
The author was indeed in the audience on Friday, as Megan reported. The following day DADS received the following from him:

Dear Mark,
Thank you so much for the warm hospitality shown to us all last night
Over the past years I have been to watch quite a few productions of my plays. The norm is that you get a cou-ple of good actors, a couple of mediocre actors, and a couple of not so good actors. That’s amateur dramatics! However, I can honestly state that every actor in your cast was absolutely brilliant. The direction was inspired and the sound and lighting were spot on cue. Well done to everyone. All your hard work has paid off!
Best of luck with tonight’s production,
Ray.